SCOTTSDALE, AZ – At the Barrett-Jackson Collector Car Event in Scottsdale, Dave Liniger, chairman of the board and co-founder of RE/MAX International Inc., bid $1 million to win “Warrior One,” a refurbished Hummer employed by CNN employed during the Iraq War. All auction proceeds benefit the Fisher House Foundation, an organization that builds “comfort homes” for families of hospitalized military personnel.

In addition to Liniger’s successful $1 million bid, Dave Ressler, a Corvette car dealer and another bidder in the auction, donated $250,000 to Fisher House.

Warrior One was the subject of an episode of TLC’s Overhaulin’ last fall. Since then, the Hummer toured military bases and other sites across the country until it arrived in Scottsdale for auction.

Warrior One visited a number of Fisher Houses as it toured military bases and other sites. These included the Brooke Army Medical Center in San Antonio; Fort Bragg in North Carolina; Keesler Air Base in Biloxi, Miss.; Walter Reed Army Medical Center in Washington, D.C.; and Fort Campbell in Kentucky. It has also been on display at events such as the Gulf Coast Veteran’s Day Parade in Biloxi; God Bless Fort Benning Day, in Columbus, Ga.; Penn’s Landing Army/Navy Salute in Philadelphia; and the U.S.S. Intrepid in New York City.

CNN producers, video journalists, and correspondents used Warrior One when they were embedded with the First Battalion, 7th Marines in the Iraq war in 2003. The vehicle came under heavy fire near Baghdad in April 2003.

This past summer, Overhaulin’ took the Hummer to the show’s workshop in Irvine, Calif. Crews overhauled the Hummer’s engine and body and installed an entertainment system that includes a DVD player, four LCD monitors, and a sound system. Airbrush artists Dru Blaier, Mickey Harris, and Mike Lavallee painted images of journalists and military men and women onto the vehicle as a tribute to those who served during or covered the Iraq war. The Overhaulin’ program featuring the Hummer aired last fall. 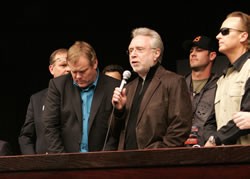 “Warrior One” on the auction block at Barrett Jackson Classic Car auction, Jan. 20, 2007. 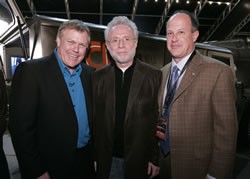