ATLANTA - AmeriCredit Corp. has given its Auction of the Year Award to Manheim’s Tennessee Auto Auction in Nashville for the second consecutive year.

Tennessee Auto Auction was named 2005 Auction of the Year, the highest honor given by AmeriCredit as part of its Auction of Excellence program. The auction competed with other regional award recipients for the national recognition.

The Auction of Excellence program is designed to recognize auctions excelling in a variety of categories, such as customer service, organization of sale, quality of vehicle reconditioning, dealer turnout, and average recovery rate for AmeriCredit vehicles. AmeriCredit representatives assess each auction’s performance in these and other areas, including pre-sale services such as vehicle transportation and condition reports.

Tennessee Auto Auction received AmeriCredit’s Southeast Regional Auction of Excellence award for the second, third, and fourth quarters of 2004 and was also recognized as the regional winner of the year and the Auction of the Year. 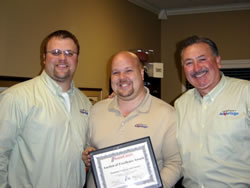