EAST WINDSOR, CT – To showcase more than 500 Swedish Vehicles from Volvo and SAAB at its February sale, Southern Auto Auction regaled its customers with a “Winter Carnival.” Hundreds of dealers were greeted by massive ice sculptures of a Volvo V70 and a SAAB 95, each crashing through a 10-foot wall of ice.

Once in the main lobby, dealers encountered Storm Troopers from the movie Star Wars, who were guarding a large tent that had been transformed into a winter wonderland, complete with glacier formations, an eight-foot high snow sculpture of a Volvo and SAAB key fob, and the Northern Lights flashing across the sky. As each entered the tent, a “Snow Queen” presented them with a sale list and a winter carnival sticker as she explained the promotions taking place in the lane. Darth Vader then made a special appearance to explain that the top buyer that day would receive the Master Replica Lightsaber on display.

Promptly at 9:30, the Storm Troopers escorted the Snow Queens and Darth Vader to the auction lanes, which were decorated with large Volvo and SAAB banners as well as Swedish flag pennants. After the announcements were completed, the crowded lanes came alive with the auctioneer calling bids from snow-flake-draped blocks and dealers eagerly raising their hands. As dealers confirmed their purchases, they received their choice of a limited edition Swedish hat or scarf.

The sale concluded with a drawing for prizes, and winners were treated to photos with all the Snow Queens and Star Wars characters in the main lobby. More than 85 percent of the vehicles were sold. 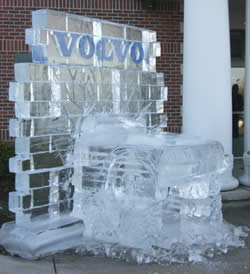 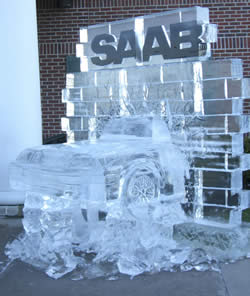