SANTA MONICA, CA — Three-year-old used cars currently sell for about 16 percent more than they did this time last year, according to Edmunds.com. Typically, used-car prices rise 4.6 percent from year-to-year.

“The remarkable price increase is easily attributed to basic economic principles: used car supply is down, and demand is up. Why is supply down? In recent years, automakers largely withdrew from leasing and now the effects are starting to kick in, so off-lease inventory is starting to dry up. Also, thanks to relative softness in the new car market, there aren’t as many used cars being traded in. Meanwhile, demand is up because many traditional new car shoppers are now considering used due to the economy,” said Edmunds.com Analyst Joe Spina, who is responsible for the Edmunds.com True Market Value Used Vehicle Appraiser data.

Domestic cars are benefitting the most from the price spike. Three-year old domestic cars are selling for about 18 percent more than they did this time last year, while European used car prices fell during the same period. The following chart sets forth the data for each region of origin:

Slicing the data by segment, minivans jumped the most, 27.1 percent, while midsize cars fell 1.6 and was the only segment to post a decline. Notably, many of the Japanese midsize cars are selling at lower prices while domestic and Korean midsize cars are commanding higher prices.

The following chart sets forth the data for each segment: 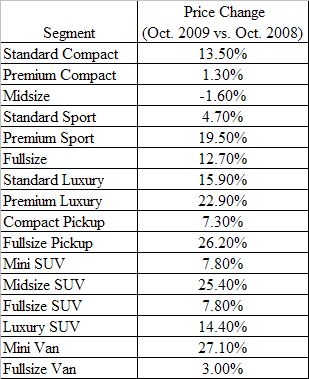 “Barring any other atypical market forces or dramatic changes in gas prices, we expect that used car prices will be stable over the next few years – which is good news for consumers who plan to trade in soon,” Spina told Edmunds’ AutoObserver.com.