KANSAS CITY, MO – Reminding auction customers that “We're not in Kansas anymore!” the Kansas City Independent Auto Auction (KCI) recently celebrated the one-year anniversary of the opening of its all-new facility in Kansas City, Mo. The auction marked the occasion with a two-day anniversary event on July 22 and 23 that included more than 750 vehicles crossing the auction block, a cocktail party, live music, and KCI apparel giveaways.

In July 2008, the auction made the long-awaited transition from its original location in Elwood, Kansas to Kansas City, Missouri, holding its inaugural sale on July 31, 2008. The move proved a successful one resulting in significant growth in its weekly sale lineup. Over the past year, KCI has added a number of corporate consignors, including KIA Motors, Avis Budget Group, Suzuki and Capital Finance, and have expanded consignments from area new and used car dealers.

"We certainly expected good things from our move to our new home last summer, but the increase in business has exceeded even our expectations," declared KCI owner Doug Doll. "We've recorded a 20-percent increase in consignment and a 15-percent increase in vehicle sales over the past 12 months. We appreciate the confidence our customers have in us, and planned our anniversary sale to show our thanks for their loyalty and support.”

Doll notes that the auction is already working on expansion plans in response to the rising demand for its services. Among those plans are provisions for additional parking, and an on-site reconditioning facility that will open in the spring of 2010.

KCI Marketing Manager Melissa Miller explains that while the auction is new to Kansas City, Mo., it has a long history in the region, and marked 31 years of business at this year's anniversary sale. The two-day event began Wednesday afternoon with 100 late-model vehicles, including units from KIA Motors, Avis Budget Group and area dealers. Following the auction which recorded a 67-percent sale, the KCI staff entertained 200 customers at a post-sale cocktail party, where all enjoyed appetizers, complimentary beverages, and live music, performed by Justin Timmey, a member of KCI's auctioneer staff.

"We're had lots of fun celebrating the fact that we're not in Kansas anymore," said Miller. "Dealers who 'followed the yellow brick road' to KCI on July 22nd and 23rd found a tremendous selection of vehicles, some great entertainment, and the finest auction service available!” 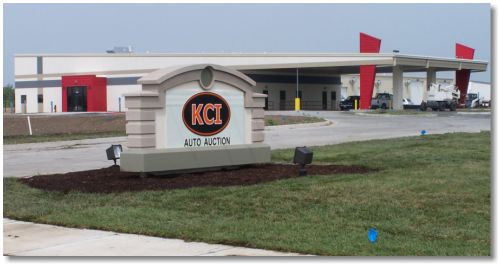 Miller notes that the fun will continue at KCI with two additional special events planned in August. On August 19th and 20th, the auction will host a Corn Roast Sale, where all customers will enjoy hot buttered corn-on-the-cob right off the grill while they work the sale and Nebraska dealers attending the sale will benefit from special incentives. Then, the auction will celebrate National Auto Auction Association week from August 24th through 28th, offering a pancake feed on sale day, Thursday, the 27th, and more than $5,000 in post-sale prizes.