WAVERLY, NY - Ray Canzler was recently honored by State Line Auto Auction as the newest member of its 20-Year Club. He joins an exclusive group at State Line that now includes nine members who have spent two decades or more working at the auction facility in Waverly, New York. Ray has the double distinction of being not just one of the longest-term employees, but also being the oldest employee. At 83 years old, Ray is going strong, and has no immediate plans to leave his post as one of State Line Auto Auction's dealer representatives.

"State Line Auto Auction is one of the best places I've ever worked," remarked Canzler. "I thoroughly enjoy my job, and give much of the credit for that to Jeff Barber, who is a great guy to work for, and who runs a top-notch operation."

Job satisfaction is infectious, and Ray's rubbed off on his son, Mike, who joined his dad at the auction five years ago. Mike works as a dealer representative in the Scranton, PA area.

After a long career in the retail automotive business, Canzler retired as the general manager at a local dealership at age 62. His work as an auto dealer took him to several auto auctions in the region, and he remembers selling new cars to Harry Barber, Jeff Barber's father.

"I've known the Barber family for a long time," said Canzler. "I admired the family, and knew Jeff as a young man, when he went to school with my son, Ray, Jr. We go back a long way, and when I decided that sitting at home after retirement wasn't for me, I called Jeff to see if there was something I could do at the auction."

"There's nothing like an experienced employee for getting results, and Ray does an outstanding job for us getting customers to attend the auction," said Jeff Barber. "I appreciate his loyalty, admire his work ethic and value his years of experience. It's an honor for me to recognize him as member of State Line's 20-Year Club." 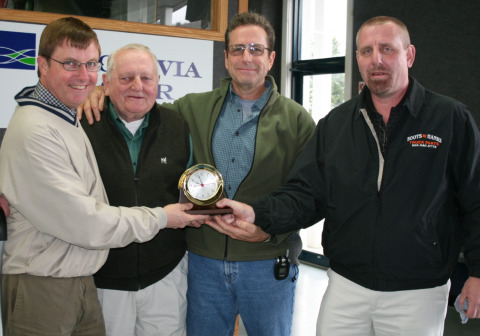