Close
ATLANTA – Tracey Doi, group vice president and chief financial officer of Toyota Motor Sales U.S.A. Inc., was presented with Manheim’s third-annual Automotive Woman of the Year award. She received the award at the Northwood University Dealer Education Awards Breakfast during the National Auto Dealers Association (NADA) Convention in Las Vegas. The award was created by Manheim to honor a woman who has been a leader in her profession and has contributed to improving the automotive industry. In addition to the recognition, a contribution of $15,000 will be made in Doi’s name to a scholarship fund for female students at Northwood University. Previous winners include: Marcy H. Maguire, Maguire Automotive Group president, in 2005, and Pam Nicholson, Enterprise Rent-A-Car executive vice president and chief operating officer, in 2006. These women were honored for their successful business endeavors and service to the industry.Doi joined Toyota in 2000 as its corporate controller, after working with L.A. Cellular and AT&T Wireless. Today, as group vice president and chief financial officer, Doi oversees core accounting, corporate finance and business planning. Her responsibilities include providing support for the Toyota, Lexus, and Scion divisions that coordinate sales, service, and parts for more than 1,400 independent dealers throughout the U.S.Doi also serves on the board of directors for the March of Dimes, California Chapter; the board of governors for the Japanese American National Museum; and the board of the Organization of Women Executives. Doi is also a member of the CFO Executive Board. 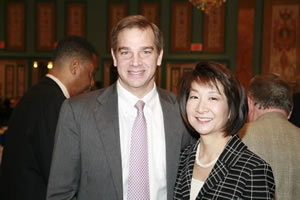