SCOTTSDALE, AZ - After its debut on TLC's Overhaulin' and a nationwide tour of military bases and hospitals, a CNN Hummer that saw action during the war in Iraq goes up on the auction block at the Barrett-Jackson Auction Co., a classic car auction house.

The auction takes place Jan. 20, at the Barrett-Jackson Collector Car Event in Scottsdale. The Hummer - nicknamed "Warrior One" - is featured as Lot #1281. All proceeds from the auction will be donated to the Fisher House Foundation.

"Warrior One" was the subject of an episode of TLC's Overhaulin'. Since the refurbished Hummer was presented to CNN employees last fall, Warrior One has toured military bases and other sites across the U.S., including the Brooke Army Medical Center in San Antonio; Fort Bragg in North Carolina; Keesler Air Base in Biloxi, Miss.; Walter Reed Army Medical Center in Washington, D.C.; and Fort Campbell in Kentucky.

The vehicle has also been on display at events such as the Gulf Coast Veteran's Day Parade in Biloxi; God Bless Fort Benning Day, in Columbus, Ga.; Penn's Landing Army/Navy Salute in Philadelphia; and the U.S.S. Intrepid in New York City.

"The crew from Overhaulin' created a memorable tribute to military personnel who serve during times of war and the journalists who cover them," said Jim Walton, president of CNN Worldwide. "We feel the Fisher House - with its mission to support military families during times of medical need - is an ideal recipient for the proceeds raised by the auction."

"We are delighted to learn of CNN's efforts to honor America's heroes - its service men and women wounded in the global war on terrorism," Fisher House Foundation Chairman Ken Fisher said. "The visibility that will result from this initiative will help Americans understand the selfless sacrifices of the men and women who risk their lives to defend and protect us."

Since its founding in 1991, Fisher Houses have offered more than 2 million days of lodging to more than 100,000 families. Presently, the organization operates 35 houses in 16 states, plus two houses in Europe. The Fisher House Foundation currently is building a home in Tampa, Fla., and two for Brooke Army Medical Center in San Antonio, and planning news homes in Dallas; Richmond, Va.; Seattle; West Roxbury, Mass.; and a second home in San Diego.

CNN producers, video journalists, and correspondents used the vehicle when they were embedded with the First Battalion, 7th Marines in the war in Iraq in 2003. The vehicle came under heavy fire near Baghdad in April 2003.

This past summer, Overhaulin' took the Hummer to the show's workshop in Irvine, Calif. Crews overhauled the Hummer's engine and body and installed an entertainment system that includes a DVD player, four LCD monitors and a sound system. Airbrush artists Dru Blaier, Mickey Harris, and Mike Lavallee, painted images of journalists and military men and women onto the vehicle as a tribute to those who served during the war in Iraq or covered the war. The Overhaulin' program featuring the Hummer aired last fall. 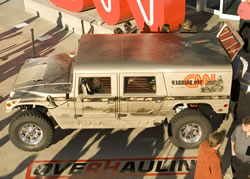 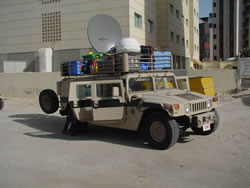