Close
ATLANTA – Manheim’s Aloha Auto Auction in Honolulu, Hawaii, recently hosted a delegation from the Chinese Automobile Dealers Association (CADA). It was their first visit to a U.S. auto auction. Thirteen members of CADA, including Fan Ganping, vice president of Shanghai International Commodity Auction Co., Ltd., and Manheim’s joint venture partner in China, observed a live auction featuring consignments from Ford Credit, VW Credit, DaimlerChrysler, Hertz Rent A Car, Alamo Rent A Car, and AmeriCredit. Following the auction, Aloha Auto Auction General Manager Dewey Hess took the group of on a tour of the auction facilities.“As Manheim expands its operations into China, it is important to develop partnerships with the Chinese dealer industry,” Hess said. “This visit by CADA was a great opportunity for us to begin to build those relationships.”Through the aid of a translator, Hess discussed the U.S. wholesale auto auction process with Ganping. CADA members had inquired about U.S. practices such as fee structures, the block ticket process, and the importance of reconditioning.Manheim recently opened its first auction facility in China when the Manheim Guo Pai Auction in Shanghai held its first sale on Sept. 20. The facility will celebrate its official grand opening with a ceremony and sale Nov. 29. 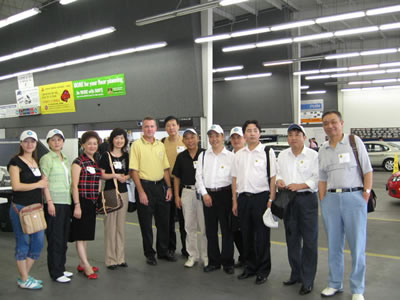 Members of the Chinese Automobile Dealers Association pose with Aloha Auto Auction General Manager Dewey Hess at a recent visit to the Manheim facility. This was the group's first visit to a U.S. auction. 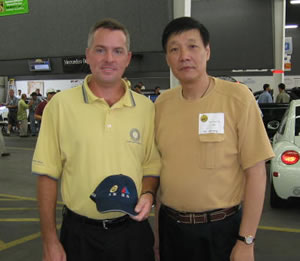