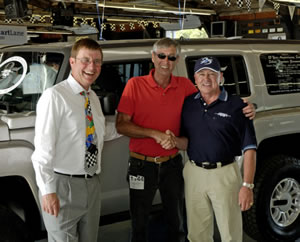 WAVERLY, NY – State Line Auction celebrated its 25th anniversary June 16 with the largest sale in its history. Owner Jeff Barber reported that 974 vehicles were sold out of a total consignment of 1,757.

State Line’s auction barn was packed nearly wall-to-wall with dealers at the anniversary sale, and the excitement reached a fever pitch when, after six months of anticipation, the drawing was held for the H-3 Hummer giveaway. Waverly native Geoff Bodine, former Daytona 500 winner, voted one of the top 50 NASCAR drivers of all time, and an old friend of Jeff Barber, pulled the winning ticket. Dick Marshall from Seneca Falls, N.Y., stepped forward to claim the Hummer and was congratulated by Bodine, who spent the rest of the day signing autographs and chatting with old friends.

In addition to the Hummer, the Progressive “Big Bucks” jackpot of $8,500 was awarded to David Cosklo of Diamond Auto Sales in Scranton, Pa.

After the prize giveaways, dealers were treated to a traditional chicken barbecue. The afternoon culminated with live music and anniversary cake for all.