In addition to the recognition for Nicholson, an award of $15,000 will be made in her name to a scholarship fund for female students at Northwood University. The award was created by Manheim to honor a woman who has been a leader in her profession and has contributed to improving the automotive industry.

Nicholson began her career with Enterprise Rent-a-Car in 1981 as a management trainee at a rental office in St. Louis. Over the years, Nicholson was promoted through the ranks to one of the company’s top operating positions in Southern California. As regional vice president, Nicholson helped the Southern California group become one of the largest operating groups in the company.

Nicholson currently oversees more than 6,500 offices and 61,000 employees worldwide. Outside of work, she is actively involved in St. Louis business and civic affairs. She currently serves as a member of the board of directors for the Humane Society of Missouri and Energizer Holdings, Inc., and is a committee member in the St. Louis Regional Chamber and Growth Association. She is also director of the Enterprise Rent-a-Car Foundation and a supporter of a number of social causes, including the United Way. 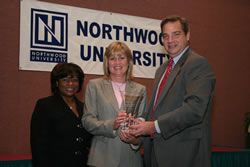 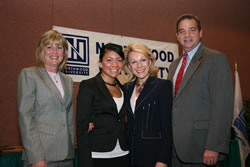